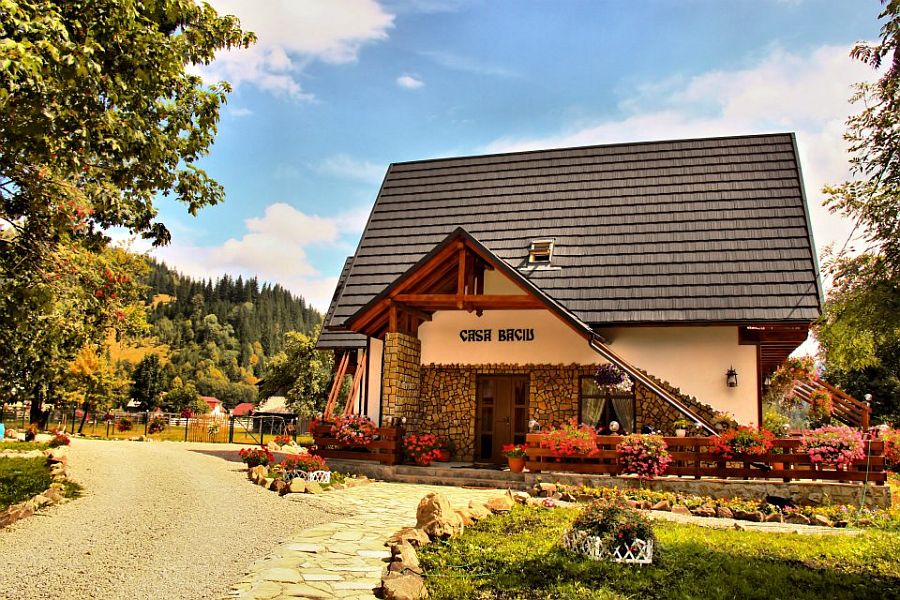 From a traditional butchery to a rustic Romanian guest house

The text in Romanian HERE

I really love it when I come across close-knit families that get together and put their backs into a new project. And in the process, not only do they fulfil their dreams, but they surpass every expectation and reach the unexpected. And why? Because they listen, they pay attention to people’s wants and needs. Baciu family began in 1997 with a butchery. They bought a ruin, an old run down slaughterhouse, established since the time of Franz Joseph in 1815 but, like many other local businesses has been left to decay. Luckily they were inspired by the place and brought it back to life. Yes, our couple, Viorica and Ion Baciu were very good at making traditional sausages and other cold cuts, and not just any cold cuts, but the most authentic and traditional ones, following old recipes inherited from „sweet Bucovina” as they lovingly like to say. 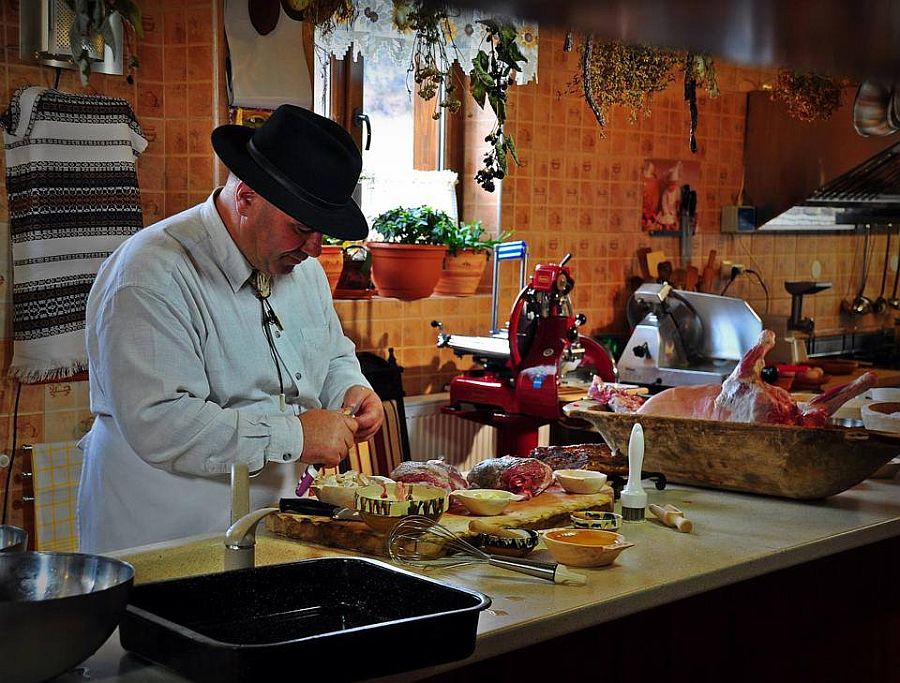 Ion Baciu in the kitchen 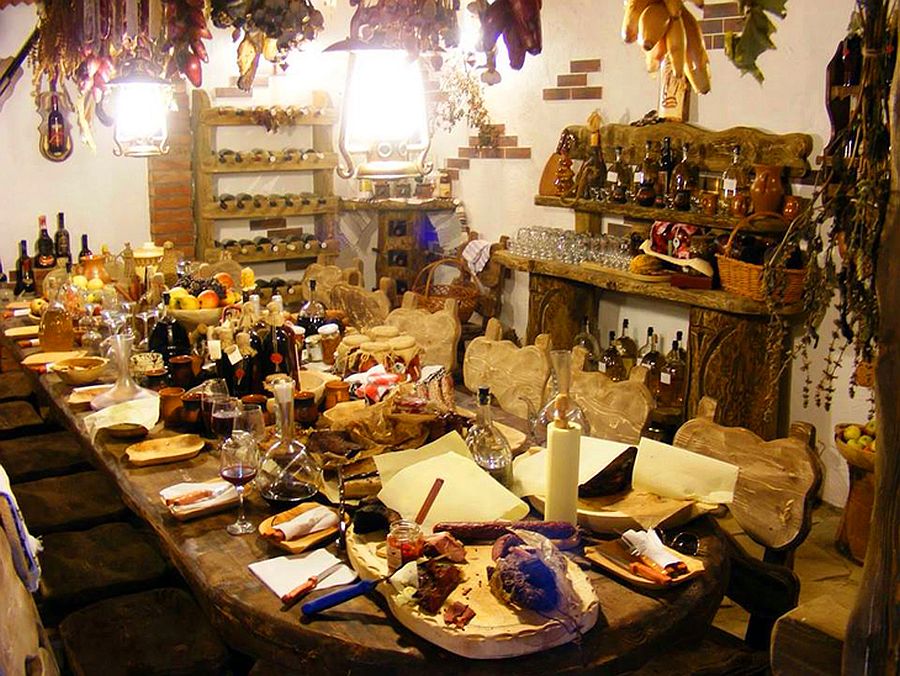 They named the company blending the names of their daughters Ana, Delia and Veronica (A – DEL – VERO). That’s how ADELVERO was born, a meat processing company that due to the high quality and authenticity of its products has become a great national and international success. Mrs.Baciu told me that through the grace of the Royal House of Romania, (for whom they supplied their products for a while) they were introduced to Prince Charles, Prince of Wales. And for a while they even worked on one of his private farms in the United Kindom where they were preparing this authentic charcuterie delicacies in house, showcasing not only their skill but most importantly introducing to their exquisite British clientele the superb taste of our meats from Bucovina. 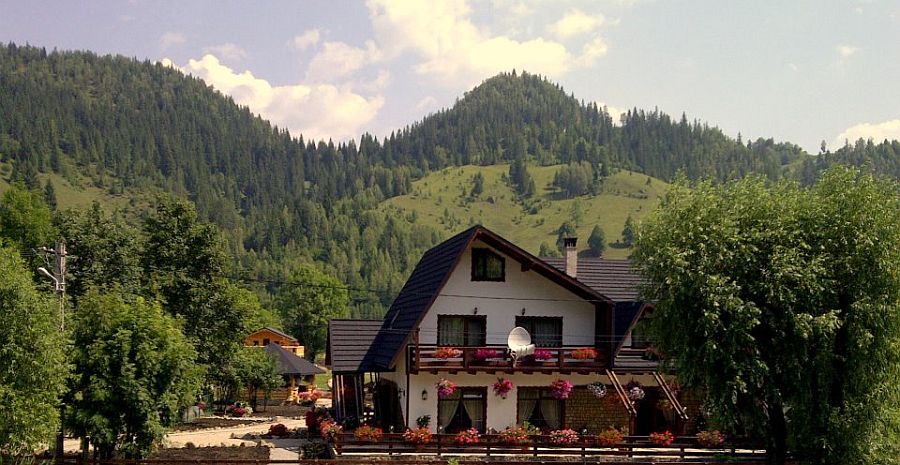 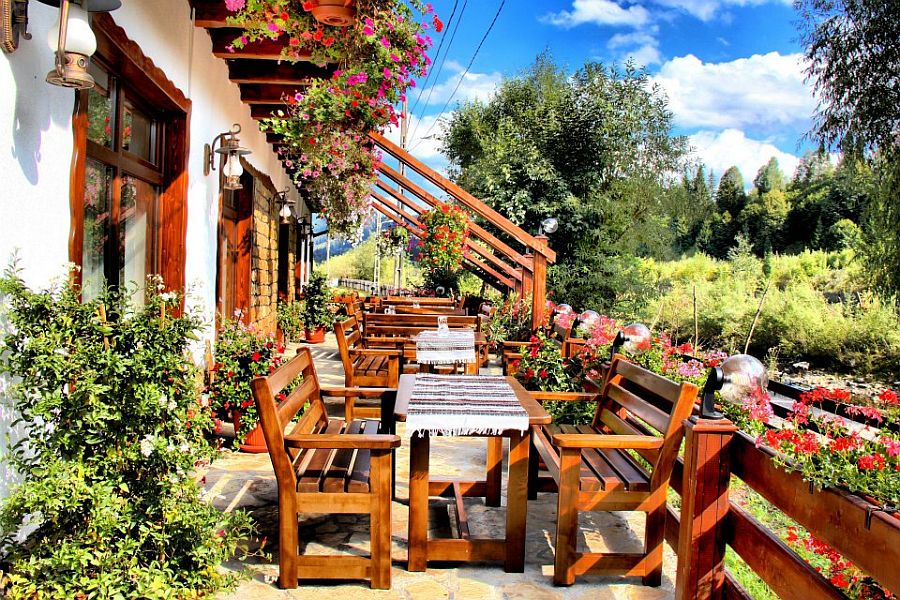 In the beginning they took their products to local fairs and markets, but customers were very curious to find out more about their meats. Some even manifested an interest in visiting their production unit to witness the manufacturing process live. And so, in the building of the old slaughterhouse, with a Habsburg Empire architecture, they have welcomed many people eager to see for themselves exactly how it all happens. From this moment on, the opening of their first stores was just a stone’s throw away. They opened the first ones in Campulung Moldovenesc (closest to them) and then in Vatra Dornei. Recently they’ve also openened a store in Bucharest on 59 Floreasca. Obviously under their own name, La Baciu (means At Baciu). 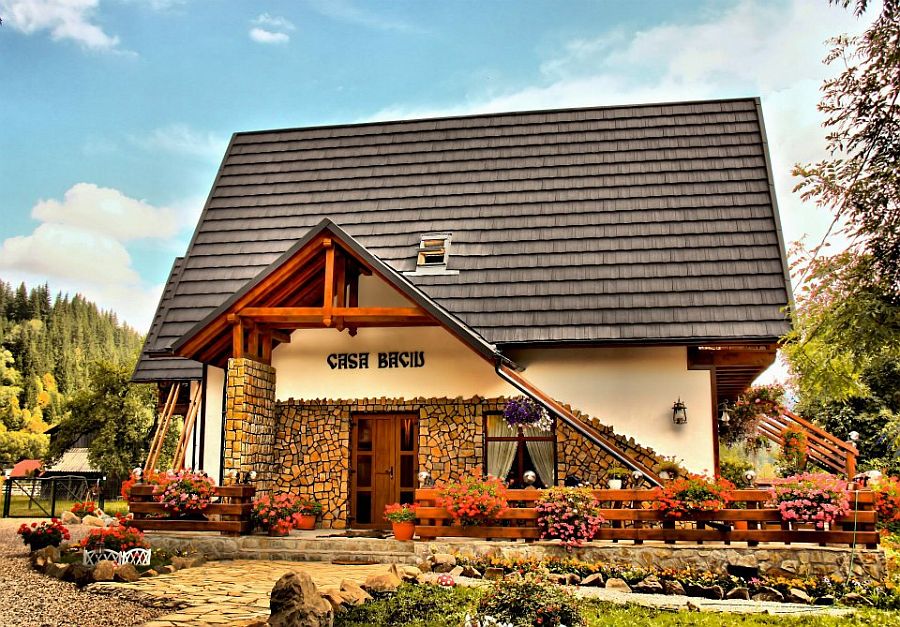 But then something else happened. Customers were coming at their charcuterie store in their neck of the woods, in the farthest corners of Moldova but didn’t feel like leaving so soon, they wanted to stay a little longer, a few more days, maybe in a bed and breakfast in the village, because the area was so beautiful, so enchanting. And that is how the Baciu family got together again and decided to open a guest house. They started planning and they transformed an existing outhouse in the yard of the production unit. It’s not too big, but they made six guest rooms out of it, in a charming rustic style, just like their products. And they surrounded the house, with the help of local craftsmen, with beautiful landscaping and resting spots. Obviously, a bad-ass barbeque was an absolute must in the back yard of any serious butcher. And the idea of a fish pond was just a natural consequence at this point, of course! 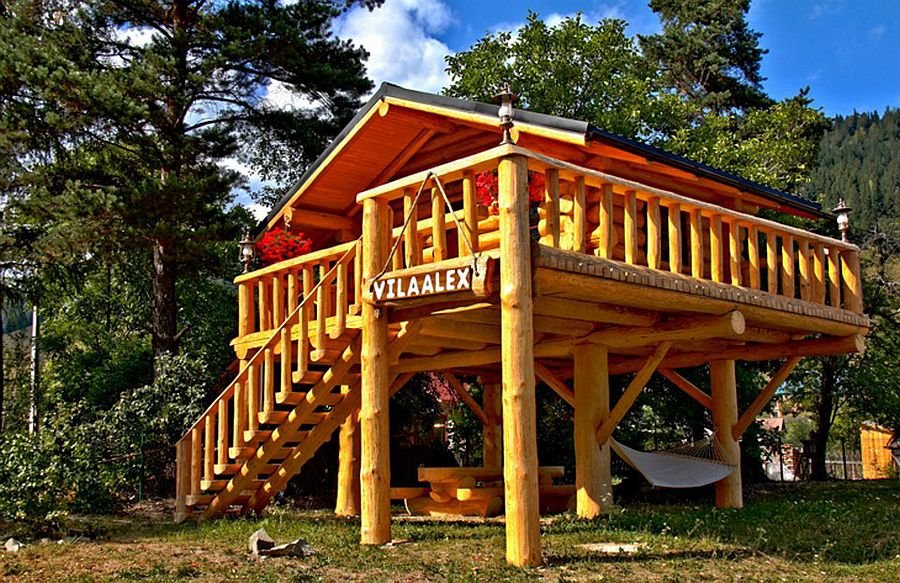 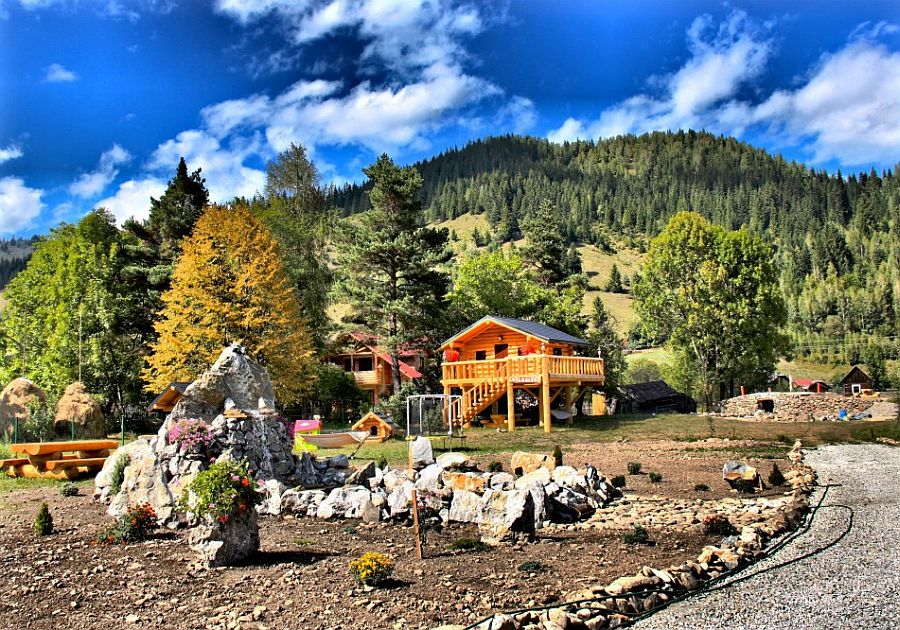 It took them about two years to properly set up the guesthouse and the outdoor relaxation areas. Everybody was involved, the whole family, including their parents and their three daughters. They managed to open three years ago. No need to mention that all their guests are being stuffed and spoiled with some of the best food they’ve ever had, but on top of that they can also visit the production unit and witness the manufacturing process. They produce a wide range of charcuterie and they are all authentic, certified by the Romanian Ministry of Agriculture, sourced locally, and they all proudly wear the „La Baciu” label. Many of their recipes are homologated as original traditional products, and for their exquisite taste Viorica and Ion Baciu have been invited not only at national fairs and at the Muzeul Taranului Roman (Romanian Peasant Museum) in Bucharest, but also at international fairs in Brussels, Tel Aviv, Rome and London, to represent and promote our country and its products. 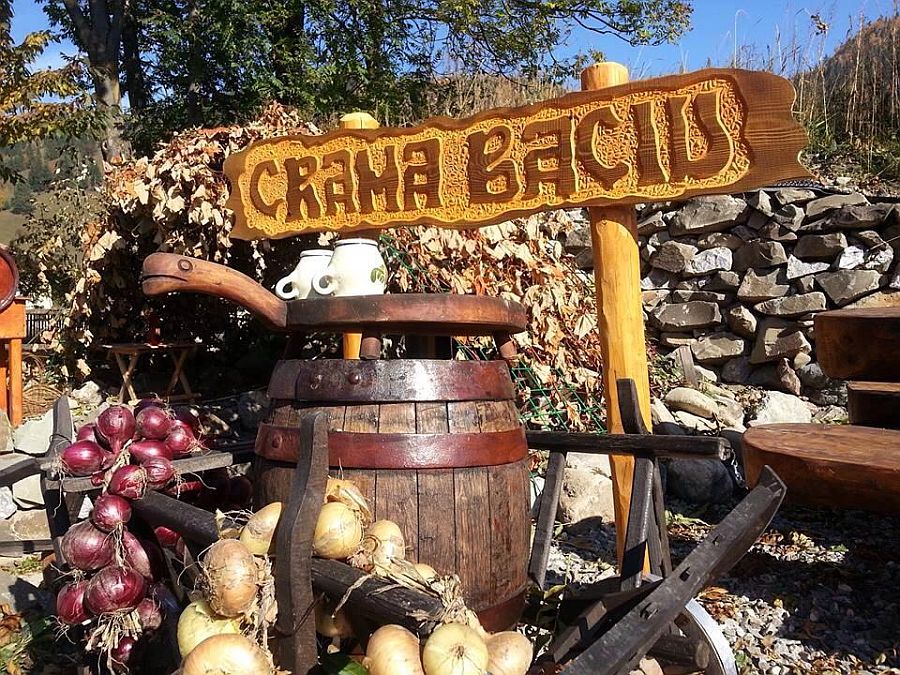 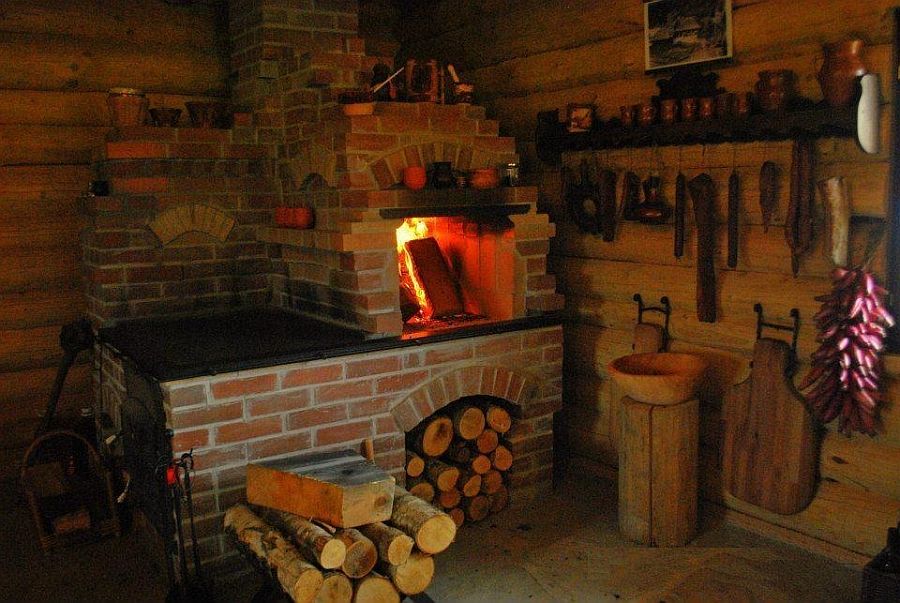 These people have managed to transform their own taste and enjoyment into a brand that now proudly represents Bucovina and implicitly Romania. And although their business is a success, they still enjoy going to fairs and markets, listening to their customers, to their feedback and working hard. They are not taking it for granted or getting lazy, quite the contrary. They want to create new and exciting recipes and to promote all natural, healthy products, homemade, without any preservatives or chemicals. I was truly impressed with their passion and their openness.
If you want to find out more about their products you can check out their site at labaciu.ro  where you’ll also find all the details about their guesthouse. They also have a Facebook page. I hope you will also be inspired by this story, check them out! 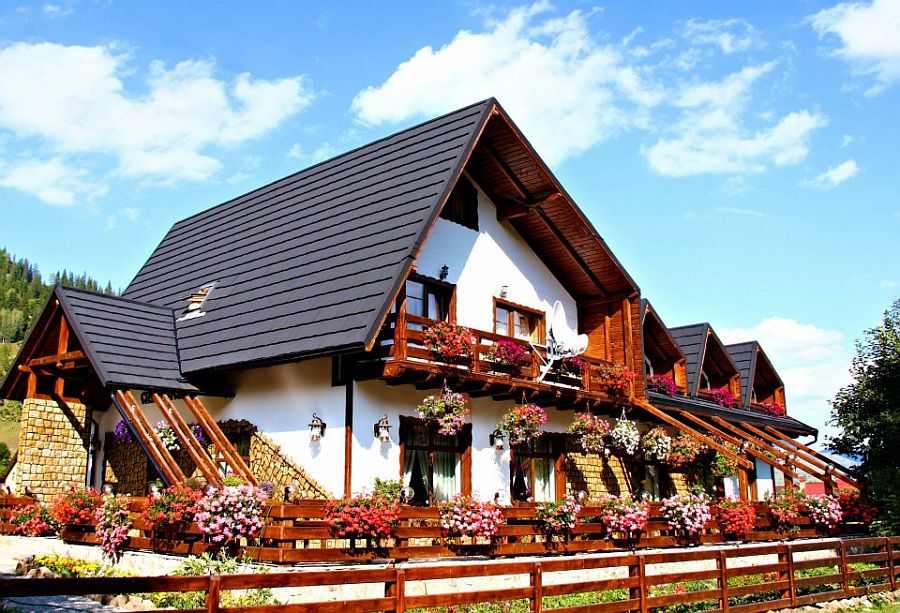 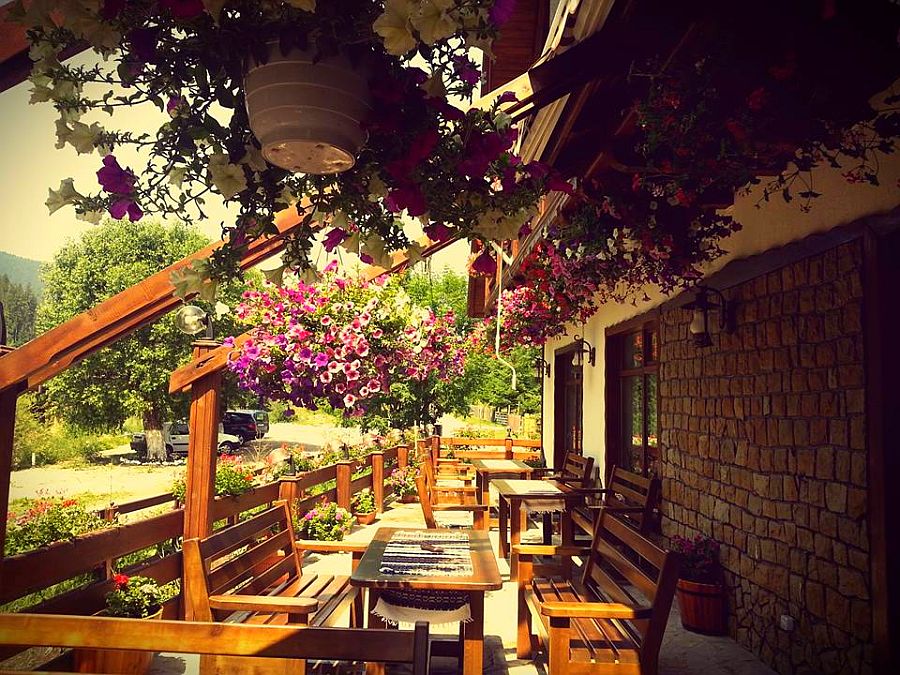 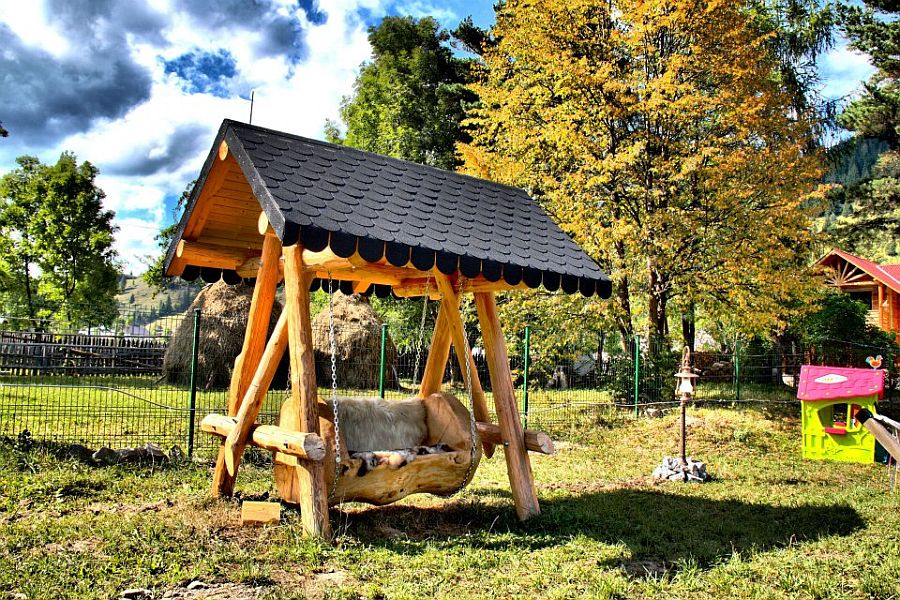 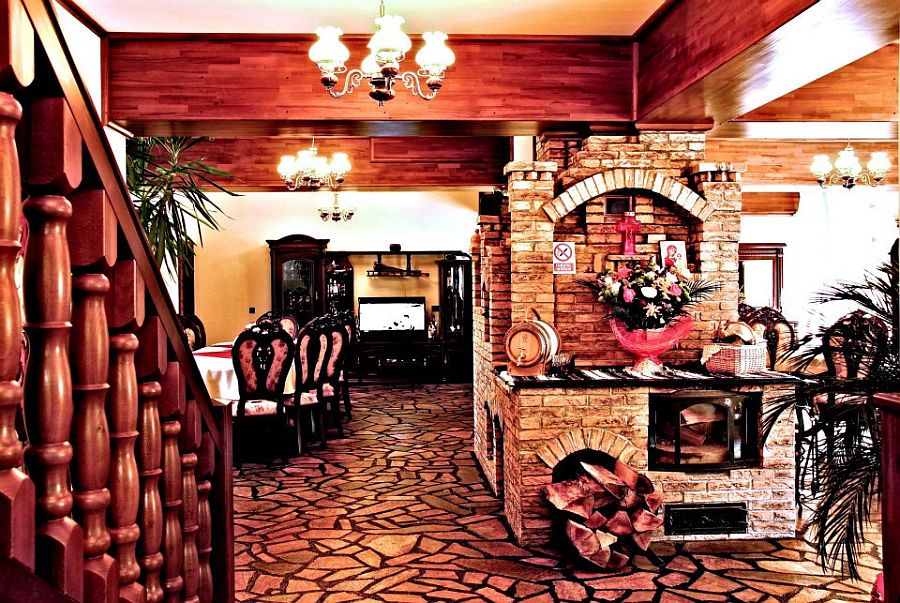 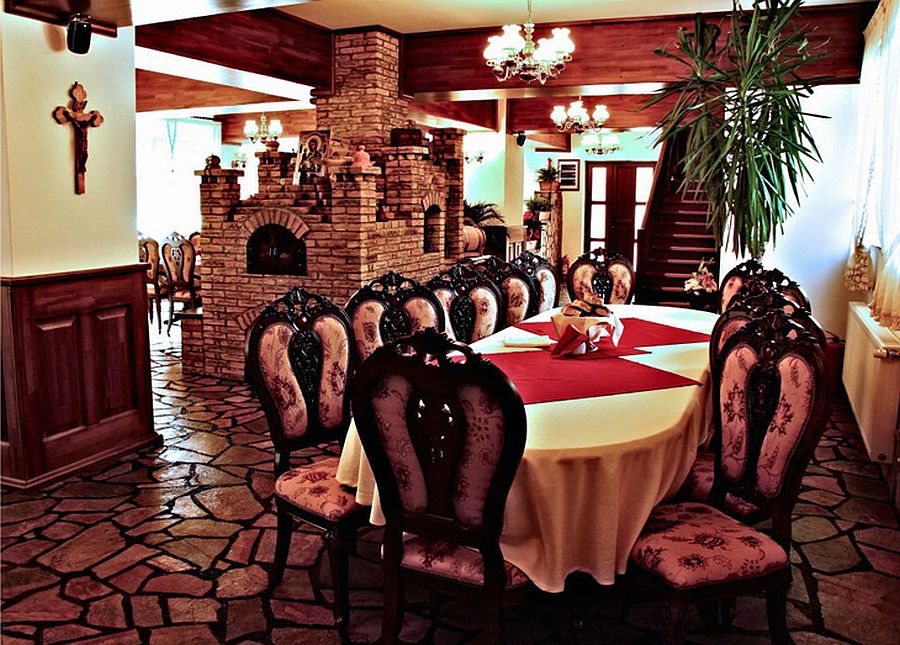 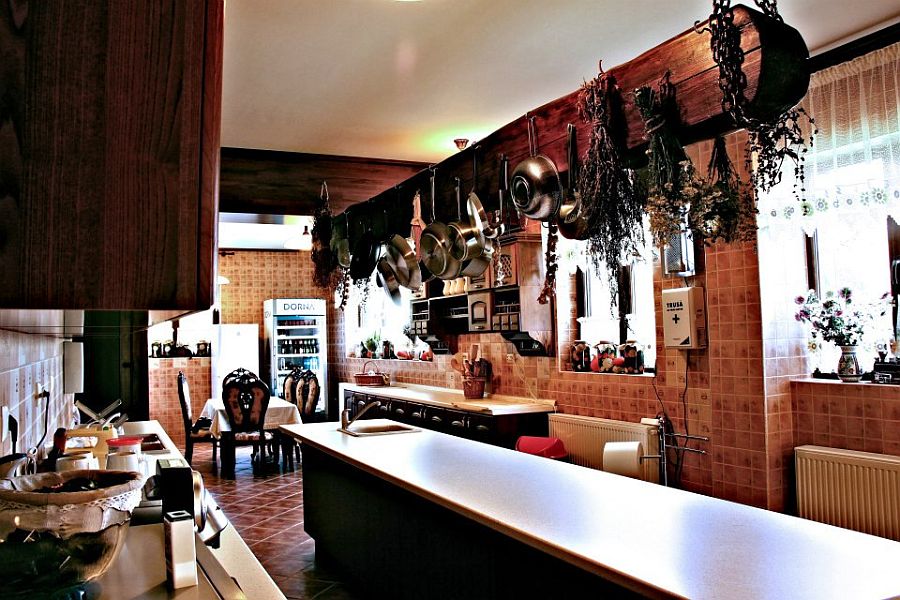 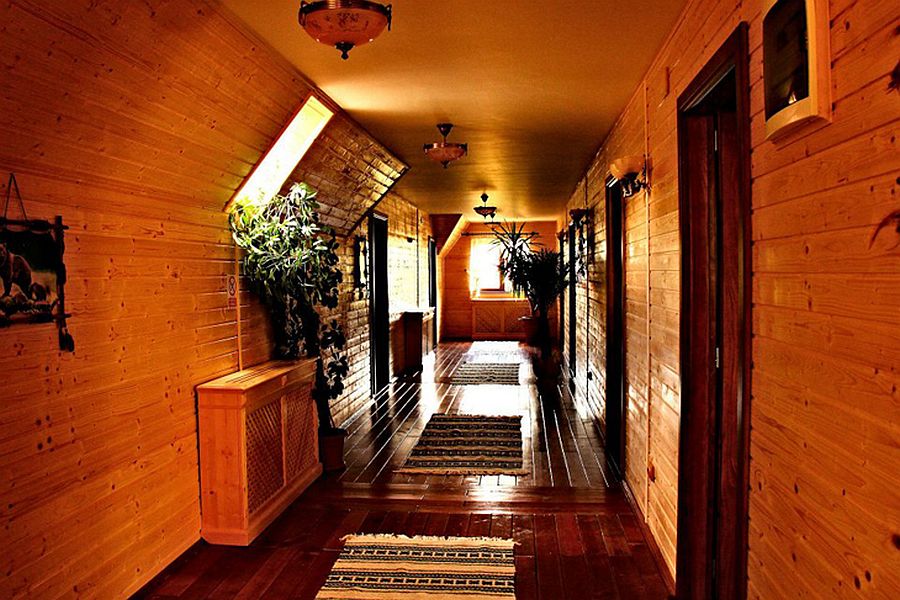 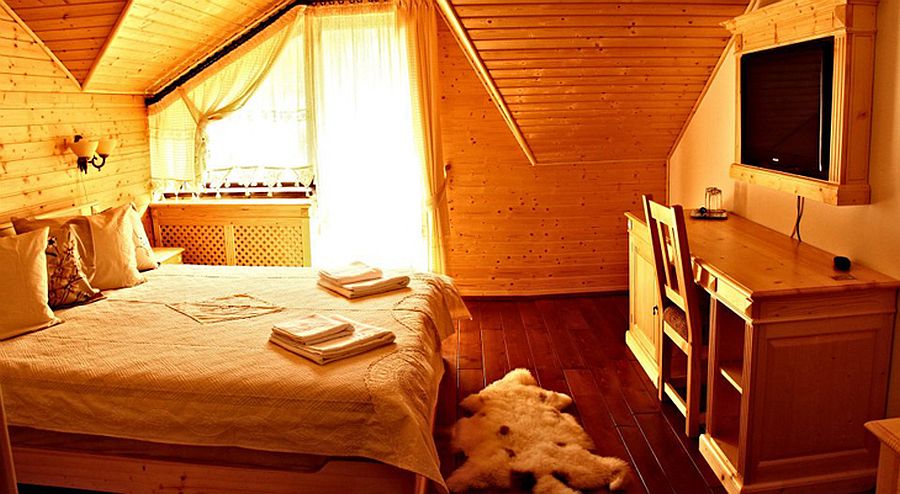 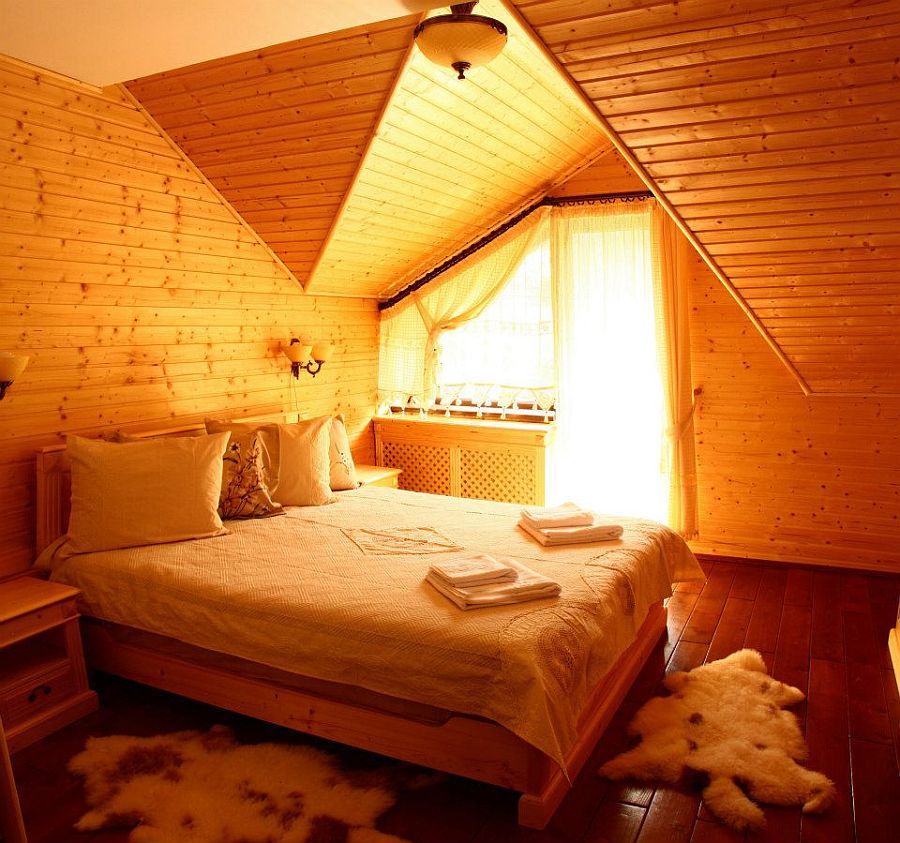 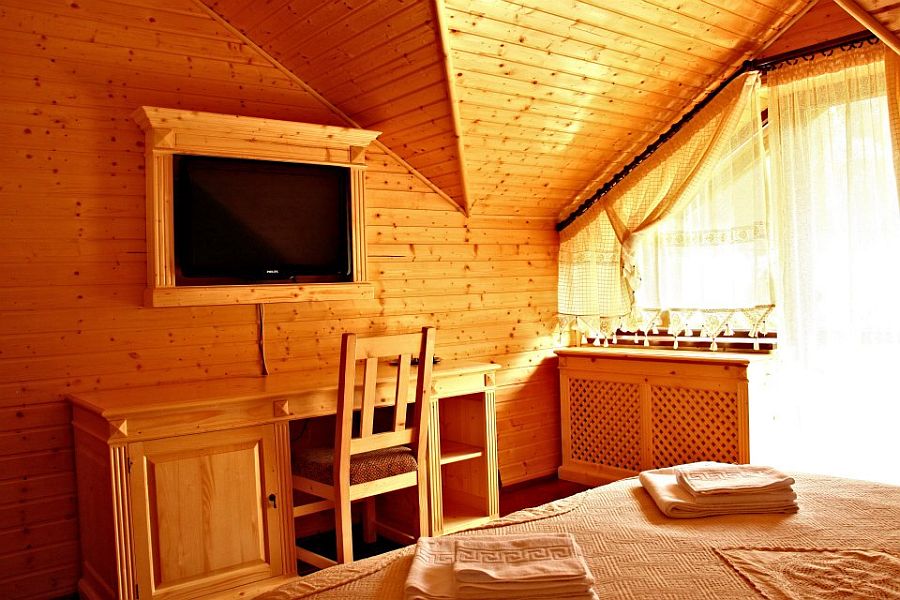 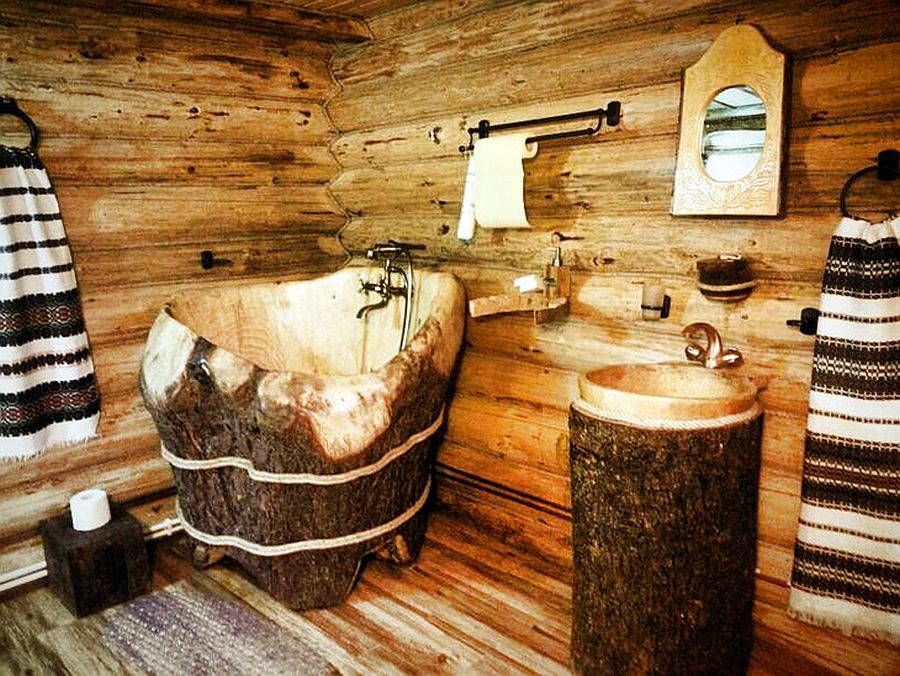 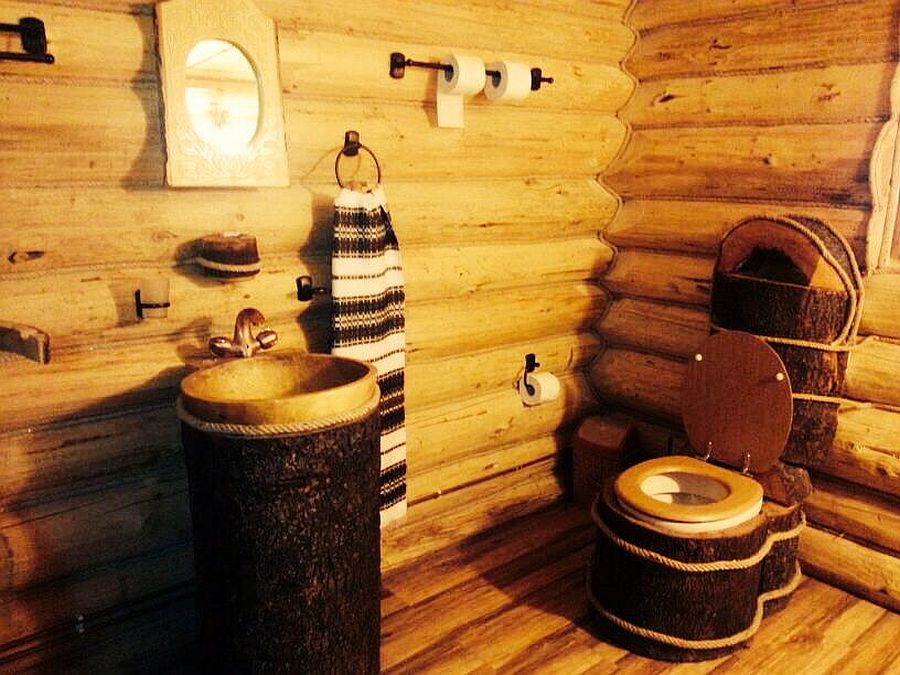 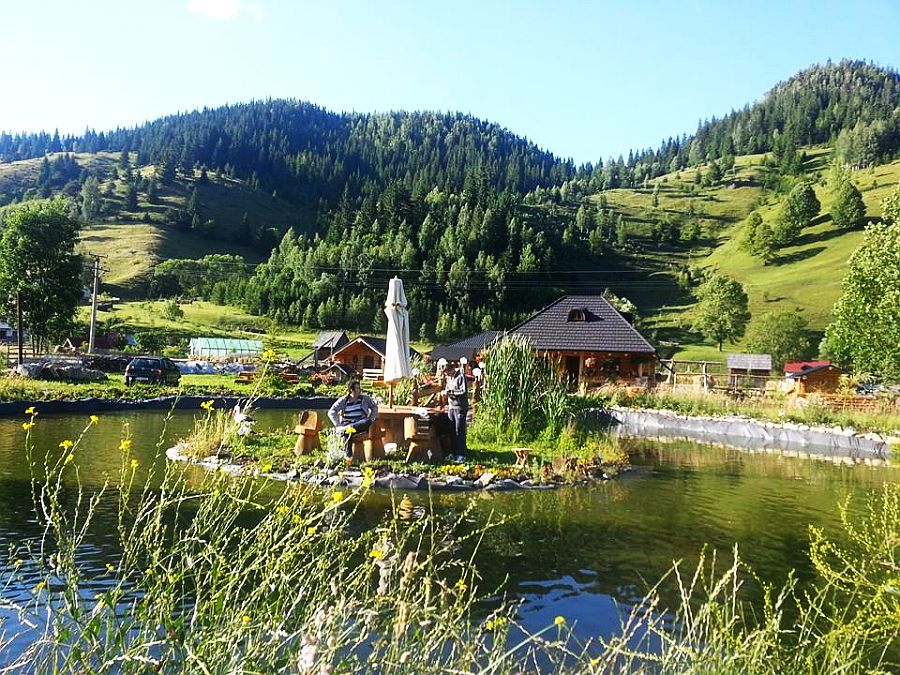 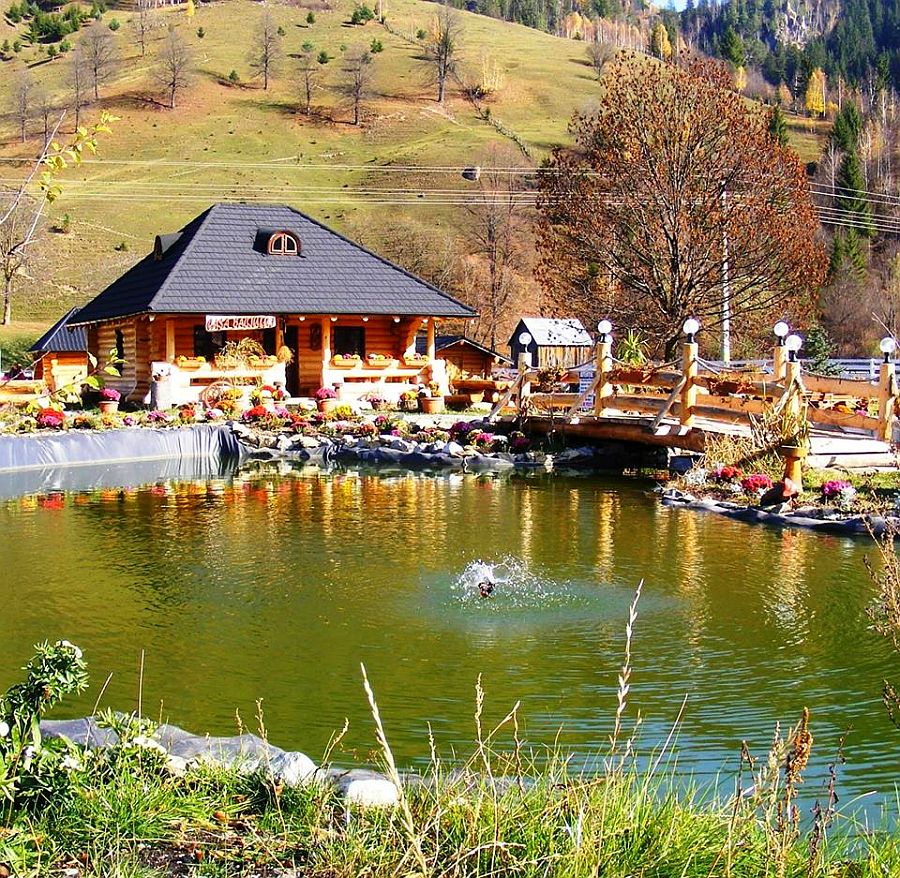 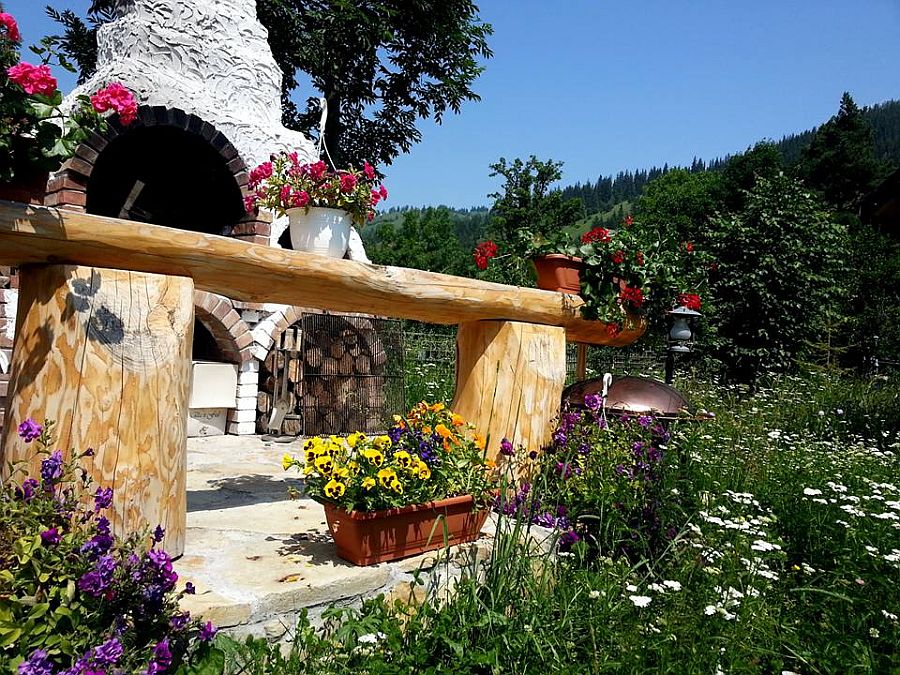 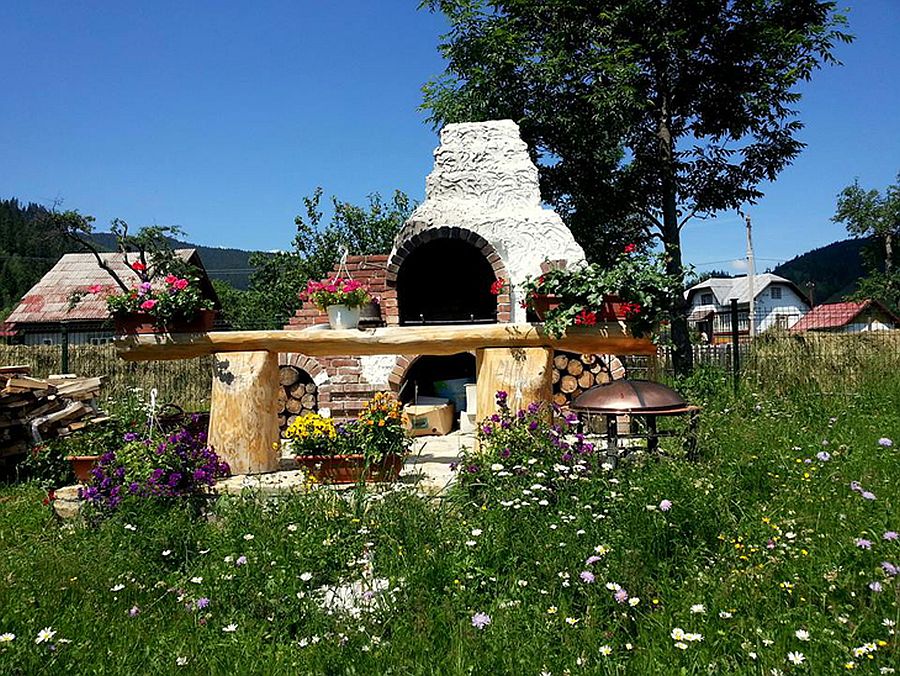 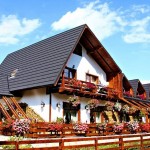 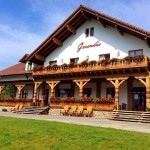